Discover a very unique variation of "Barbie", a small fine art sculpture made by Volker Scheurer in 2019 at the Kunstraum Kieswerk in Weil-am-Rhein, Germany.

"Barbie (Bronze)" is a small fine art sculpture made by Volker Scheurer in 2019 at the Kunstraum Kieswerk in Weil-am-Rhein, Germany.

This artwork is made of bronze in a German foundry. The size is about 33cm X 9cm X 16cm.

This fine art sculpture is to place ideally as a home decoration for living rooms, office, tables, or any furniture, as well as in any interior or exterior environment with free spaces to welcome this beautiful contemporary design.

"Barbie is relaxed. You don't know that otherwise.

Her female ancestor told her that women's lives weren't so stress-free among previous generations.

The woman had to take care of educational tasks, often also take on political tasks, at times the female part of the population also had to work, even give birth to children. And the body animals were by no means as easy to keep as they are today, which required a considerable effort in terms of hygiene and required great diplomatic skills. Her great-grandmother was one of the last women to give birth to a child with a deep pregnancy and a subsequent birth. Now that's the men's thing.

You, Barbie and your friends are happy about this development. You can now be a woman. They gave their annoying mother duties to the kens of this world generations ago. Barbie can now devote herself extensively to your beauty and the care of your body animals. With its two new legs in the upper right half of the body, the aesthetic feeling of the male part of the population was taken into account, since this side always required more legs.

The women are also very happy with this small exchange - arm for double leg - because it is now possible for you to wear two pairs of shoes.The research that led to this success was largely driven by the big fashion labels. The footwear and trousers sales in the women's division have doubled since this extremity swap.

Inspired by Joseph Beuys, today's woman sees the animal world as the external organs of human beings and therefore integrates them into the outer body zone. The body animals contribute a lot to the general well-being.

The animals also actively participate in social and intellectual exchanges. The animals native to the erogenous areas have also made it their task to satisfy Barbie sexually extensively and permanently.

The various animal species, which in the past often devoted themselves to minor wars for ethnic reasons, are now, it seems, finally pacified.

Due to the resettlement of the frogs in the hair and head area, they were also spatially separated from the penguins, which was and is very conducive to peace on Barbie's body. Gradually, deep friendships emerged from diplomatic relations.

An animal harmony has spread to the ladies' bodies in this modern world.

All works in the QUINTESSENCE SERIES are spontaneous, emotional and gut-shaped works that deal with opposites that come together in very different compositions.

35 years of experience as a creative artist give the seemingly chaotic works their deep order and basis.

A cynical, sometimes poetic interplay of controversial, symbolic elements, animals, plants and cult items from different time and style epochs are the basis of these objects seeking meaning.

On closer inspection, each part used has its own identity, its surface, the time it was created and popular, its local affiliation and also its specific proportion.

The final material, bronze, combines the differences between the individual components, the 3D collage, and gives you an everlasting value that manifests itself in immortality.

Some works undergo a further transformation through a layer of 24 carat gold, which gives them a further and new identity. The quintessence works can be from a deep past or seen as a glimpse into the future.

After casting the object, when they come back to the artist from the art foundry, they often get a story of a mostly surreal interpretation from the artist.

The viewers are also called upon to bring their own fantasies into play. Each viewer can assign their individual story to the bizarre objects through their very own interpretation.

The first work in this series Salmon, Boar, Squirrel was created in 2015. The last work is The Piglet and the Rose from 2020.

You can choose to order this sculpture with a finishing in bronze or in gold depending your preferences for interior decoration. We recommend you making sure to have the right variation selected when placing your order, because there is a slight difference of price between the 2 versions.

There are no reviews yet.

Only logged in customers who have purchased this product may leave a review. 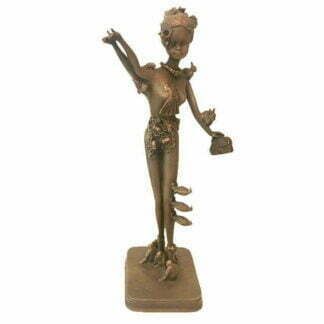