"Das Transatlantische Herrentreffen" is a heavy fine art sculpture made by Volker Scheurer in 2019 in Weil-am-Rhein and available now at BayardStore.

"Das Transatlantische Herrentreffen" is a heavy fine art sculpture made by Volker Scheurer in 2019 in Weil-am-Rhein.

This artwork is made of bronze in a German foundry and is about 43cm X 40cm X 19cm.

This beautiful sculpture is ideally placed as a decoration for homes, offices, esoteric shops, as well as any room with a desk, sideboard, dining table, living room table, or bookshelf ready for welcoming more art.

History of this artwork:

The American Apache chief and the core European garden gnome sit face to face in the boar body.

Above the bones of Barbie there is no place for the humor that made these two continent representatives known worldwide.

Was Barbie and her sisters sacrificed for a new world order to be negotiated, does the shepherd boy bring the sacrificial lamb to safety through the back exit in good time?

Is it a conversation, a negotiation, a ritual or a chat among friends what we are looking at from the outside here, or is a new mesias worshiped with the carrot-skinned hare.

It is a very special kind of interview.

Concentrated and inwardly or in the carrot skin hard the rabbit, the things that come his way. He was only vaguely informed by the two men and the job advertisement was not very specific.

A god who unites the previous gods and religions.

The rabbit in a carrot skin must do justice to all ethnic and nutritional groups.He, the rabbit in the carrot skin, has his own aura and the deep spirituality to tackle such a cosmo-religious task.

These two foxes know that.

The carrot fur from the umbelliferous genus radiates deeply in the floral community with its symbolic power.

This is important because this new religion should also include plants. The tooth of wisdom, worn backwardsis intended to bring dental doctors closer to the faith and serves as an archive and library.

"The animals, the people and the whole plant world have found their God in this rabbit" it will be read later in the sacred "Pipel".

An internationally operating advertising agency has taken on the "god thing".

The new god should be tangible, recognizable, tangible, almost real.

So, the rabbit in the carrot skin.That the rabbit and the carrot have known each other for centuries from the European cultural area is no secret, or should we better say kitchen room.

A tasteful team. But that has only marginally to do with the topic that the two gentlemen are discussing in the boar carriage.

On the edge of the plate, so to speak.

The Apache chief and the garden gnome are likely to agree on the basic appearance of the new god, although the Indians always use the sparse Headdress criticized.

But now it's about the religious, spiritual content. So far, there has been very little useful from the advertising agency. After all, a god is a god and Persil makes white and nothing more.

Semi-technical information on the boar body.

The boar body is a vehicle that takes into account all of today's safety aspects. For example, the fat-draped bristly blackboard is a soundproof and shock-resistant chassis with excellent CW values.

The light-footedness that can be activated - on Barbie's delicate feet and hands - enables almost silent movement even at top speed, which amazes even the Indian chief.

He ordered two of these comfort carriages for the shortlyBison hunting permitted again.

The back exit, "After Work", enables an inconspicuous exit after work.

The two Barbie flags on the body nose are of course deadly with live ammunition. Equipped with the "Sentimental"are they rationally romantic in their clout?

The "Sentimentale" is a future-oriented ammunition recipe made from various barbie tears. Shot down during large-scale demonstrations infected with violence, these very quickly turn into gentle heartbreak events.

The Vatican would like to use the boar carts because of their pig-like defense umbrella as popemobile, although it is difficult to invest in the holy state, since one has already heard of the rabbit in the carrot skin there.

It is an uncertain time for the ancient religions.An expansion of the boar body models is being promoted by the vegan society.

The pig disappears from the supermarkets and you can find it again in the parking lot in front of it, to take the vegan families home with their vegetables shopping.

My god what a pig! My rabbit what a god!

All works in the QUINTESSENCE SERIES are spontaneous, emotional and gut-shaped works that deal with opposites that come together in very different compositions.

35 years of experience as a creative artist give the seemingly chaotic works their deep order and basis.

A cynical, sometimes poetic interplay of controversial, symbolic elements, animals, plants and cult items from different time and style epochs are the basis of these objects seeking meaning.

On closer inspection, each part used has its own identity, its surface, the time it was created and popular, its local affiliation and also its specific proportion.

The final material, bronze, combines the differences between the individual components, the 3D collage, and gives you an everlasting value that manifests itself in immortality.

Some works undergo a further transformation through a layer of 24 carat gold, which gives them a further and new identity. The quintessence works can be from a deep past or seen as a glimpse into the future.

After casting the object, when they come back to the artist from the art foundry, they often get a story of a mostly surreal interpretation from the artist.

The viewers are also called upon to bring their own fantasies into play. Each viewer can assign their individual story to the bizarre objects through their very own interpretation.

The first work in this series Salmon, Boar, Squirrel was created in 2015. The last work is The Piglet and the Rose from 2020.

There are no reviews yet.

Only logged in customers who have purchased this product may leave a review. 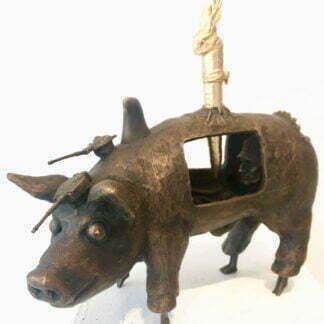